There are several things that I enjoy about Monterey Car Week (and several things that I don’t). But of all the auctions, events, races and carspotting that goes on during auction week, my favorite moment has to be “Dawn Patrol” — the early morning gathering before the start of the Pebble Beach Concours d’Elegance.

Dawn Patrol was never really a formal event, and to some extent, it officially still isn’t. You can’t buy a ticket just to go to Dawn Patrol. I’ve overheard folks on the street who have asked that very question, hoping to gain admission.

Still of the Morning

Years ago, a few of my fellow journalists began showing up in the dark, early morning hours on the concours grounds to get photos of the show cars as they entered the judging field.

The cars all line up at the entry gate, where concours Chairman Sandra Button hands them their judging packet, points out where they’re to park — and wishes them well as the enter the field. For attendees, this is where you can experience every car actually driving — with an added benefit of being present on the show field well ahead of the general admission crowd’s 9 a.m. arrival.

At first, few wanted to get up early enough for this experience. Others cited the damp, misty ocean breeze at six in the morning as a reason to wait. So the group who did show tended to be dedicated and hearty. They were driven for the result.

Back then, it wasn’t a big deal to flash your media credential to security at the entrance to the field — you were working press and you had a job to do. My first year there, I just walked in with a fellow credentialed journalist with a simple “he’s with me as an assistant” comment.

After a few years, the folks at Hagerty Insurance noticed the few brave souls and put up a table with coffee and doughnuts for us — “Eat Free or Die” is the credo of the automotive journalist. A couple of years after that, Hagerty had the idea of passing out complementary hats with your doughnut, which later became a specific Dawn Patrol hat.

Dawn Patrol was starting to get markedly crowded — and everyone wanted a hat (some being posted on eBay for sale before the concours officially opened to spectators). Then “Road and Track” wrote about it in their online guide to Monterey as one of their go-to events in 2017.

Dang it, don’t they know that you never tell anyone about your favorite fishing hole?

So with the return of Pebble Beach after the 2020 COVID-19 closure, Dawn Patrol was also back and bigger than ever. And while there was plenty of coffee and a pastries for everyone (even standing in a line for up to a half an hour for it), there weren’t enough hats for demand. “You can never make enough hats for this,” said Hagerty SVP of Brand, Soon Hagerty.

In some ways, I’d just as well say to anyone inquiring about Dawn Patrol that it’s cold and it’s crowded. Sleep in, because you’re better off waiting until the concours opens and it’s daylight.

Of course, that’s just me wanting to keep my fishing hole to myself. The secret is already out, so pick your spot and be careful not to tangle anyone else’s line.

Yet even with jumping through all the hoops to stand in the dark dank fog with a rapidly cooling cup of coffee and a doughnut for breakfast, while hoping to get a hat without being trampled in the most upper-crust mosh pit you’ll ever see, Dawn Patrol is my couple hours of closure for the week in Monterey.

You might say it’s a case of being glad that the end of Monterey is upon us, but more than that. It’s a chance to drink in and enjoy the spectacle of historically significant cars I may only see this one time in my life; watching the players take to the field in the combined World Series, The Masters and Super Bowl of collector car events. 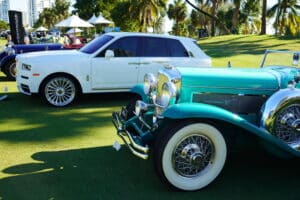