This summer is going to be amazing.

COVID-19 vaccines are spreading faster than the wretched disease — at least in the United States.

A lot of concours, vintage racing, shows and casual cars & coffee events will attract swarms of gearheads all summer and into the fall.

I’m sure most of you have already spent some quality time with email, texts, calendars and phone calls. It’s important to get things lined up fast, as demand will be high.

I’d also suggest a driving trip to one of the fabulous national parks in the United States.

Both of these parks feature massive loop road systems — and spectacular sights along those roads.

Olympic National Park is on the Olympic Peninsula in Washington State. U.S. Route 101 circles the entire park, and spur roads take you inland to special spots, such as the Hoh Rain Forest, Lake Quinault, and the spectacular drive to Hurricane Ridge. U.S. 101 also takes you to the Pacific Coast section of the park, where you find miles of scenic beaches — and great driving.

Olympic National Park features attractive, comfortable hotels, such as Kalaloch Lodge, Sol Duc Hot Springs Resort and the Lake Crescent Lodge. Wonderful towns near the park, such as Port Townsend and Port Angeles, also offer great places to stay and eat. Bring your passport, as you can put you car on a ferry in Port Angeles and drive it off in Victoria, British Columbia.

Yellowstone National Park, which is bigger than some states and occupies parts of Idaho, Montana and Wyoming, is like nowhere else on this planet. Yellowstone is a spicy stew of geysers belching hot steam into the air, hot springs, dense forests, alpine meadows and jagged peaks. You’ll see the full lineup of North American wildlife, from grizzly bears to wolves to elk to bison to moose — and on and on and on.

You will see elk, deer, bears and bison without leaving your car. Yellowstone is America’s Serengeti, and people travel from all over the world to watch and photograph the plentiful wildlife. These animals don’t fear humans, but they are not tame, so keep your distance!

Rivers and lakes are everywhere.

The Grand Loop Road is a 142-mile figure eight, and it takes visitors to all the scenic areas. The maximum speed limit in the park is 45 mph — or less in many sections — but the roads are still fun, especially early in the morning when traffic is light. You may be tempted into more spirited driving, but these roads are full of blind curves — and wildlife.

Avoid driving at night if possible, as elk and bison are all over the roads, and they’re almost invisible in the dark.

The best drive is Dunraven Pass between Canyon Village to Roosevelt. The road winds up to almost 9,000 feet, and the views are gorgeous. You will see grizzly bears if you take this 19-mile route early in the morning. The best driving is always early in the day — before traffic gets heavier. This is a steep, twisty road, and some parts don’t have guardrails.

If you want more driving — and stunning scenery — take the road out of Roosevelt and drive through the Lamar Valley and on to the Beartooth Highway — all the way to Silver Gate and Cooke City.

For drivers, the best times of year to visit Yellowstone are before Memorial Day and after Labor Day. I spend several weeks in Yellowstone each fall, and it is paradise.

Yellowstone has great places to stay in the park — the best are the Old Faithful Inn and the Lake Yellowstone Hotel — and the gateway towns offer a full range of hotels, motels and campgrounds.

I’ve seen droves of sports cars in Yellowstone and Olympic national parks, but the happiest drivers seem to drive nimble, slower cars that can show off in the curves. You’ll see supercars, but they’re chained beasts in a national park.

My Toyota Tacoma 4×4 is my ride of choice in a national park, as I’m there for flyfishing, wildlife photography — and at least a few nights of rustic camping. I like to split my trips up with some nights in a tent and some in a nice hotel.

If I chose to drive a sports car, I’d pick an air-cooled Porsche 911 or a Corvette.

Your trip should start with a visit to www.nps.gov, where you can find tons of information about every national park in the United States. Start planning now, as hotels sell out fast. 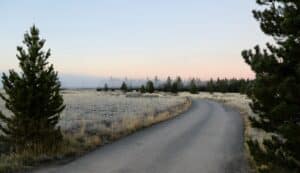 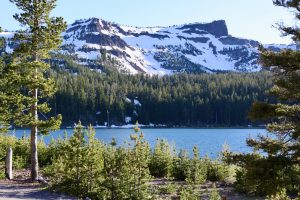