Turning trucks into luxury-themed status symbols has worked wonders for GM over the years. The company has sold a lot of rigs under the “Denali” banner — trucks that were fundamentally the same as the base-level versions, built with nicer finishes and better tech where possible. It’s a winning combination that the public just can’t seem to get enough of.

As such, Denali trucks have been the luxo-truck market leader for years — but staying on top of an evolving market means taking bold steps.

Yep, GMC calls this the “Ultimate,” with a bold tag right on the top of the fender at eye-level. Special dark chrome trim is everywhere, from the massive grille to the 22-inch wheels. It stands out.

Not that you’d ever miss it without the trim. These new half-ton trucks are huge. I had to count the lugs to be sure it wasn’t a 3/4-ton. There’s an imposing sense about that dark, towering Denali grille that causes traffic to part in front of you, which is kind of the point.

My tester was fitted with the optional 3.0L Duramax diesel, which is just barely rattly enough at idle and when cruising to remind you that this is in fact a truck, regardless of how nice it is inside. The stereo is programmed to turn itself up as speed increases to try to drown out that torque factory, but it doesn’t really work. XM can’t hide the rattle, whistle, whoosh of the baby Duramax, but that’s a good thing. This is a 460 lb-ft towing machine — a good long-distance single car hauler on plush, adaptive suspension.

And then there’s all the other Denali stuff: Soft-touch leather everywhere, embroidered topographical maps of the truck’s namesake mountain in Alaska and a variety of high-end add-ons that make traffic seem to melt away.

Why should your hands be cold? The wheel is heated. Back sore? The seats are heated, cooled, and they massage. Can’t see over that huge hood? There are cameras on the nose, in the mirrors, in the bed and in the tailgate that give you a 360-degree view. The Head-Up display puts the distance between you and the car in front of you right in your line of sight, along with your current speed and the speed limit.

Trouble getting out? Power running boards. Need help into the bed? The Multipro tailgate acts like a staircase. Tired of driving? The truck will keep you in the lane thanks to its lane departure system, or you can turn on Super Cruise and just let the truck drive itself.

So yeah, I think it lives up to its name.

Big in every way

All that said, these trucks aren’t for the faint of wallet. This Denali, specced out with all the options and the Duramax diesel, prices out at an eye-watering $79,340. Ultimate indeed. Don’t forget this is a half-ton truck. Wait… count those lugs again.

But that six, while more expensive than the V8 option, is a torquey little monster when paired with the 10-speed automatic. This truck is quicker than you might assume, but where it really shines is in mileage. EPA estimates on this rig put it at 22 mpg in the city and 26 on the highway. Did I mention how big it is?

While it’s quick, the tech-savvy will probably appreciate Super Cruise more than anything else, assuming they sign up for the subscription that makes it functional. When active, the steering wheel lights glow green and the system takes control, steering the truck down the road on its own and wowing your kids in the back seat.

Hit the signal stock and the truck will use its sensors to change lanes for you. Look away and it will warn you to pay attention, just in case. It’s a slick system, but all these features are not yet perfect — cross the painted lines to avoid cyclists or mailmen in the road ahead and lane departure will try to nudge you back into them. Still, America is big. Do you really want to steer across all of it?

What about the bed? The fact that it’s taken this long to get to it should tell you something about the market for this rig. Yeah, it’s big — bigger than the previous gen. And it has nice tie-downs, and that aforementioned dual-mode gate for ease of access. In no way is it an afterthought, and yet, all the tech sort of makes it one anyway.

It’s easy to forget what this is underneath when you’re not hauling stuff, which is the magic of Denali.

High Point: It’s the Ultimate in more than just its name.

Low Point: Cost. Tech is next-level, but still isn’t as smart as you are.

Final Word: A does-it-all rig with industry-leading comfort, but at a price. 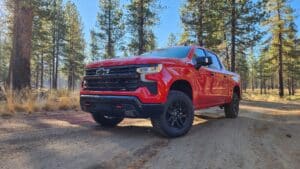