Gooding & Company will offer a significant collection of Bugatti-themed automobilia via its Geared Online auction platform in November. Comprised of over 350 lots, the Geared Online │ Bugattiana Automobilia auction will open for bidding on Monday, November 7. Lots will begin to close at 9 pm PST on Friday, November 18. The collection — all offered without reserve — is comprised of items that showcase Bugatti’s impeccable craftsmanship, the company’s influential role in motor sport and personal items that belonged to the Bugatti family.

“We are honored to present this magnificent collection of Bugattiana, which contains some of the finest, most significant Bugatti artifacts in private hands,” says Gooding & Company Senior Specialist, David Brynan. “This is truly a museum quality collection, carefully assembled and curated over a span of decades by one passionate Bugattiste. This is a singular opportunity to acquire important, never-before-seen pieces, many of which have well-established ties to the Bugatti family and legendary drivers of the period, such as René Dreyfus and Elizabeth Junek. Any enthusiast with an appreciation for the Bugatti marque will be amazed by the extraordinary contents of this world-class collection.”

A couple of the many notable lots are a 1933 Bugatti Type 52 Bebe and a c. 1946 Bugatti Type 75 You-You boat. The Type 52 was formerly owned by Vice President of Styling at American Motors, Dick Teague, and remains in highly original condition. The Bebe is sold with its original tires, vintage children’s goggles, original factory wiring diagram and photos of Mr. Teague and his son with his son Type 52.

The 3.3-meter Type 75 You-You boat was designed and built by Ettore Bugatti after World War II in his Maisons-Laffitte shipyard. Production ceased in 1947 after his death, with fewer than 30 built, all of which were in incomplete form. Few are known to exist today. This example — number 119 — is in excellent condition, having remained in the long-term ownership of two French Bugatti collectors.

Other items offered in the auction include a Bugatti Type 41 Royale Engine — No. 22 — and a Breguet Chronograph Commissioned by Ettore Bugatti for the Bugatti Royale. The clock is one of eight produced for the planned installation in the center of the steering wheel of the Royale. Also available is the Motsch Fils top hat owned by Ettore Bugatti with original box and original handwritten sections of Ettore Bugatti’s memoir from November 20, 1944. 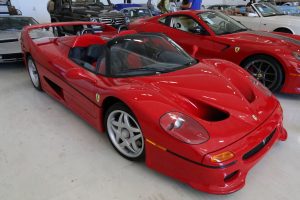 Broad Arrow Auctions Totals $55.25m at the Monterey Jet Center — And Signs On at Amelia