If you’ve been watching the market over the past few months, you’ve already noticed some high prices at auction for great Dodge, Chrysler and Plymouth muscle cars. The numbers don’t lie — demand is up for the best of the best, and when we’re talking about American muscle, it’s hard to pick anything other than Mopar muscle for the top spots. Of course, this isn’t new — Mopar muscle has been the pinnacle among collectors for quite some time, all the way back into the pre-housing market crash days of 2007 and prior.

There’s a great mix of curb appeal, brute power, great advertising and scarcity that creates a perfect storm around these cars, at least in terms of value.

Barrett-Jackson’s Vegas auction is bringing a bunch of great examples to market this month, headlined by a restored 1971 Plymouth Hemi ’Cuda. The car is a Super Track Pack example with a 4.10 Dana 60 rear, 4-speed manual, and its original 426 Hemi engine. It’s also said to come with its original fender tag and build sheet. It’s one of 59 Hemi 4-speed cars built in 1971.

Every ’Cuda convertible is rare, but a ’71 is sought after, as only 291 were built as ’Cudas that year. Both this car and the Hemi car are fitted with billboard side stripes, which were only an option for early ’71 production.

Beyond the two ’71s, the Vegas consignment list also includes a group of cars from the Lindley Collection, starting with a 1970 Hemi Superbird in high-impact Tor Red. This car is one of 135 built in ’70, and has been given a complete restoration to stock specs. It’s fitted with its original 426 Hemi engine mated to a TorqueFlite 727 automatic and 3.55:1 Sure-Grip 8 3/4-inch rear axle.

Also offered is a 1970 Hemi ’Cuda in Limelight Green, also powered by its original numbers-matching 426 Hemi and original A833 4-speed manual transmission. This is an original “slick top” car, meaning no vinyl top installed from the factory, and it’s had both its engine and transmission verified as original by Mopar authority David Wise.

Barrett-Jackson’s Las Vegas sale takes place from June 30 to July 2 in the West Hall of the Las Vegas Convention Center. 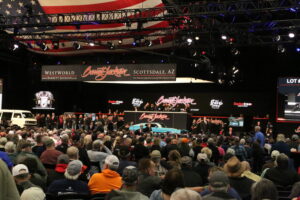